> M'bou Mon Tour is a Congolese NGO bringing together a group of local communities that are working to protect the forests and savannahs that are home to bonobos and small primates and carry out nature-friendly development activities. Their ultimate goal is to reduce malnutrition and poverty and to increase knowledge and understanding by building on the region’s rich and unique local heritage. 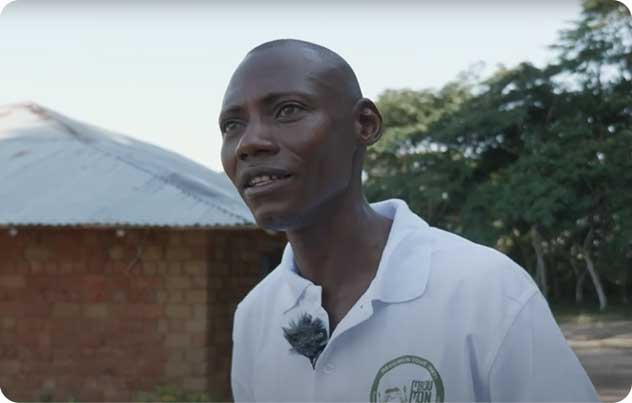 At the heart of what they do

Protecting the bonobo through cassava cultivation

> The main objective of this project is to increase the involvement of local populations in the conservation of the bonobo and its habitat by establishing new plantations using mosaic-resistant cassava cuttings in the savannah, marrying the conservation of bonobos with the well-being of local communities.

> These new cassava plantations serve to redirect cassava cultivation from the forest to the savannah securing the bonobo habitat while also ensuring food security and increase cassava-based income for the local populations.

Find out more about the project

> Having witnessed a rarefaction of certain animal species and a decline in natural resources, in April 1997 inhabitants of a number of villages in the Bolobo Territory ─ in the Democratic Republic of Congo’s Maï-Ndombe Province ─ founded an association called M’bou Mon Tour (MMT) in partnership with university institutions from the same area. This “collective mobilisation” led to the creation of an innovative community conservation programme dedicated to effecting socio-economic development compatible with the conservation of the region's biodiversity.
Headquartered in an agricultural farm two kilometres from the village of Nkala, the association’s main objectives are : the protection of the environment and the promotion of sustainable development. The association focuses its efforts across the Maï-Ndombe Province : in the Bolobo Territory for community conservation and in Mushie, Yumbi, Inongo, and Kutu for developing awareness about the protection of biodiversity.

> MMT’s vision is to create a world where people’s basic needs can be met through the sustainable management of their own natural resources. Its principal mission is to work alongside local communities in the Maï-Ndombe Province on initiatives that tackle the development, conservation, and rational management of the biodiversity.
MMT was also part of a great bonobo discovery, surprising the scientific world in 2001 with the news that the great apes were present in the Bolobo Territory, which is about 300 kilometres north of Kinshasa. Conservation organisations had long considered that bonobos couldn’t live in a habitat of this type, and it wasn’t until the WWF conducted a survey in 2005 that the presence of bonobos in the Bolobo Territory was finally recognised officially by the international community.

> Strongly supported by traditional chiefs and local populations, MMT quickly launched a series of campaigns to raise awareness about the protection of bonobos, developing a communication strategy specifically aimed at reaching a large audience by using popular songs based on the old Teke customs prohibiting the hunting and consumption of bonobo meat. In the wake of these campaigns ─ which have now been carried out by MMT since 2001 ─ in 2006, 6 villages in the region decided to dedicate a portion of their forest to the protection of bonobos and small primates. This move has resulted in the creation of community forests, based on Article 22 of the Forestry Code, which allows local communities to manage their forests to which they are entitled by tradition.

> Ever since, in collaboration with its various partners, MMT has been supporting the formation, training, and management of village tracker teams, created to ensure regular monitoring and habituation of the primates, collect data on the bonobos and their habitat, and ensure forest surveillance through community patrols.
MMT currently has two small primate monitoring sites and six bonobo monitoring sites ─ three of the sites are intended to help the gradual habituation of the species to human presence, and the further three sites are exclusively used for ecological monitoring.

> The region is in close proximity to the capital cities of Kinshasa and Brazzaville. And this location represents an important asset for the project in terms of both scientific research and tourism development. The MMT monitoring sites regularly welcome researchers and students from all over the world ─ it’s currently possible to observe the bonobos in the wild for a period of five hours at a distance of less than 15 meters. 41 trackers are currently working on the six sites under the supervision of a local coordinator, who is himself under the supervision of the management in Kinshasa.

> Looking to ecotourism, MMT has already organised three pilot ecotourism expeditions, which is an important step forward for our organisation. And in light of the growth in interest we’ve witnessed over the last months, we expect to welcome an ever increasing number of partners and tourists in the months and years to come. Investment in infrastructure and equipment will be necessary to manage this increase in volume, including :

> Looking to the Local Community Forests, the current experiment involves six village territories from the Nkala region, but several other neighbouring village communities have expressed an interest in joining the process. Mapping and consultation meetings have been carried out, resulting in official formal requests for the creation of the six further community forests. The application was finalised at a local level and submitted to the Governor of the Maï-Ndombe Province, who, in May 2017, signed the decrees allowing for the creation of these six community forests. The ceremony that saw the Governor hand over these decrees to the traditional chiefs took place in the village on 5th June 2017 ─ which also happened to be World Environment Day.

> Looking to the socio-economic aspects of the project, which are primarily concerned with reducing the pressure of the local communities on the forest, MMT is looking to give greater scope to its agricultural activities, in particular by developing a five-year global programme of sustainable agriculture. Agroforestry, livestock, and fish farming will play an important role in the programme.

> Looking to monitoring and habituation, MMT is looking to obtain global financing to allow it to : secure and standardise the salaries of all 41 village trackers employed, reinforce their technical capacities, and acquire the necessary equipment to ensure the smooth running of their activities. It is also seeking to put into practice the International Union for Conservation of Nature (IUCN) guidelines regarding the monitoring of bonobo in the field, in order to continue to improve the quality of scientific knowledge about bonobo populations in the area.

In view of all the above, we appeal to people of good will to support us in all these aspects of our mission.