> Managing climate change is the biggest challenge in the 21st century. The disturbances we are witnessing in all four corners of the globe are affecting ever more numerous and sometimes totally destitute populations. And the shrinking ice caps and ever increasing list of threatened or endangered species are clear and objective markers of a deadly evolution that is threatening our planet.

> Despite having suffered two major conflicts and endured the millions of deaths that came with them, the Global North has continued to develop thanks to huge technological advances and a massive use of fossil fuels. But this development has come at a great cost ─ one of significant damage to the environment through erosion linked to deforestation and soil, water, and air pollution. The now stagnant demographic of the Global North contrasts with the dynamism of the countries in the Global South, but their young populations understandably now aspire to the consumption and lifestyle of the most developed countries.

> While the protection of threatened or endangered species may seem “romantic” or “anecdotal” to some, it is actually absolutely fundamental. Each endangered animal corresponds with an ecological niche, a biotope, which has been or is being altered or destroyed by human activity. But by seeking local solutions that are respectful of these species’ environments and simultaneously aid the goals of sustainable development, we can contribute to the development of win-win regional projects.

> By bringing together the dynamics of “species protection” and “sustainable development” we can foster hope for better governance of our planet through new models of development.

Why did we choose the Bonobo ?

> There are animals like the Panda that immediately attract the sympathy of the wider public ─ and this can be measured by the enthusiasm shown at each new birth. But there are other animals, such as wolves or sharks, that don’t benefit from this same capital. And as for the bonobo, well they are mainly known by the general public for their “unbridled sexuality”. But how many people also know that beyond this attention-catching characteristic, there are only 20 to 30,000 individuals of the species left, a species that is very genetically close to us, Homo sapiens. Just like the chimpanzee, with which the bonobo was confused for a long time, the paths of evolution of bonobos and humans separated about 5 million years ago. But we still share 98.7% of our DNA, and the bonobo is actually our closest cousin.

> Living endemically in a vast area of rainforest in the Democratic Republic of Congo (DRC), bonobos are threatened by deforestation, hunting, poaching, epidemics... and armed conflict. If nothing changes, our closest cousin could be extinct within 50 years. 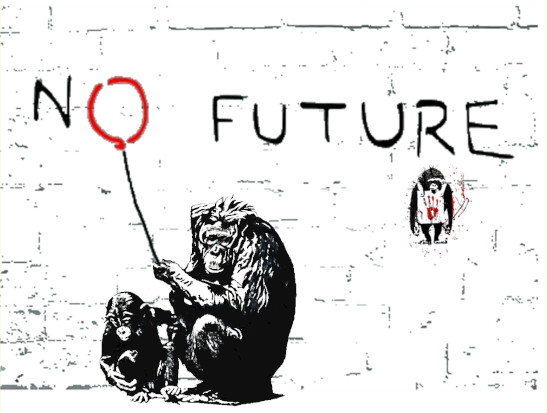 Status of the Bonobo established by the International Union for the Conservation of Nature (UICN)
EN A4cd >> Endangered !
If the bonobo were to become extinct, part of our origins would also disappear forever.

>  For almost 30 years now, this problem has been tackled by a small group of people supported by numerous volunteers who are dedicated to the cause of this particularly endearing animal. Several associations contribute to raising funds from sponsors across Europe and the United States, including “Les Amis des Bonobos au Congo” (ABC), an association founded by Claudine André with the support of Dominique Morel. This founding core has succeeded in developing some remarkable concrete actions despite the unstable political environment.

> But what society could understand, or even tolerate, paying more attention to the survival of a “monkey” than to the survival of other humans? With more money, we can do better. We can develop more ambitious and essential programmes combining education, population health, and sustainable land use in order to guarantee the protection of this endangered species in the long term.

The future of Bonobos is in the hands of Congolese people - let's stand with them !